Bella is the sister of Rehvenge, mated to the Brother Zsadist, and mahmen of Nalla in the Black Dagger Brotherhood series by JR Ward.

As a little girl, Rempoon was very controlling of her and her diet, obsessed with her appearance and that she would ruin her value by putting on weight.

Bella is noted as a beautiful vampire, which is expected from those born in The Glymera. The males of the society took a liking to her and as she fancied one, who is unnamed, she took the leap and slept with him outside of the bounds of mating. Something she would soon regret. The male shunned her openly after taking her virginity. Which scarred her reputation in The Glymera.

Brave and fiercely independent, Bella refused to allow the Glymera and their strict social rules to bring her down. Rejecting Vampire tradition, she used her inheritance money to buy a farmhouse and moved out of her family residence to live on her own. The far house was next door to Mary's home, and the two became fast friends over time. Bella kept her Vampire heritage a secret from Mary, however, as the laws of her people forbade her from revealing the existence of Vampires to Humans.

Bella's story starts when one night she finds Mary with a boy sitting next to her by the pool. He was mute and could not communicate properly with them, but something caught Bella's eyes, the bracelet he was wearing. She knew the language and froze at the idea of who he could be. She convinced Mary and John Matthew to go somewhere with them where they'd be able to take him in. Bella had to reveal the truth about her species, that is so that she could bring them to the brotherhood to seek out the King's help.

It was while visiting the mansion for the first time that Bella happened across the scarred Brother Zsadist while he was working out at the mansion's gym. Though he was intimidating it was an instant attraction on her part, which spurred on her fascination with him. Zsadist, believing himself unworthy, tried to push her away.

When Bella was kidnapped by the Forelesser Mr. O, Zsadist went on a rampage hunting down Lessers every night in an effort to find her. When he finally did, the damage to her was serious and made Zsadist mad for blood. She had been carved with the letters D-A-V-I-D and her eyes had been stitched closed. Bella ended up killing Mr. O while Zsadist had been injured. Yet, the Brotherhood managed to bring her back to their compound.

Already partly bonded to Bella without realizing it, Zsadist insisted that she stay in his room while he cared for her during her recovery. During that time, Bella discovered Zsadist's darkest secret. He had been mistreated during his captive days, he had not only never been properly educated (being illiterate), but he'd been conditioned to enjoy pain. Bella believed she could never help him be whole again.

Just as she was preparing to leave the mansion, Bella's needing hit. Zsadist offered her the option of morphine to reduce the pain and sleep through the experience or have him service her. She chose him. Due to the needing, Zsadist had to come to terms with what he felt was defiling her body with his. She'd finally come to accept what Zsadist had been telling her all along: it wasn't possible for her to save him. He'd succeeded in pushing her away, at last. She left the mansion after her needing passed.

Two months later after working up the courage, Bella returned to the Brotherhood mansion to find Zsadist and inform him that she'd conceived during her needing. Her intention wasn't to win him back with the announcement of her pregnancy, but rather she respected his rights as a would-be father to have equal custody to any child they'd conceived. When she walked in, she was met with a shocking sight, Mary was working with Zsadist on teaching him how to read and write.

Feeling ecstatic for him for trying to better himself, she congratulated him on his progress. Zsadist surprised her again, however, when he admitted that he'd travelled to where she was staying many times over the intervening weeks, watching over her in between his Brotherhood duties and his new studies. In a roundabout way, he told Bella that in giving him a reason to want to be better she had saved him. He then wrote out on a piece of paper how he felt about her: I LOVE YOU. That declaration melted Bella's heart. She then sprung upon him the news about how she was pregnant with his child. The two got back together and they were soon mated to each other.

Bella experiences a tough pregnancy and hides the fact that she is spotting from Zsadist, because she worries that he won't be able to concentrate on his duties. Per doctors orders she is bedridden for the rest of her pregnancy, only permitted to walk around for an hour a night.[1] A mere nine months into her pregnancy, Bella gives birth to a baby girl, who they named Nalla. She nearly died during birth and told Doc Jane to focus on saving the baby, fully expecting to die and worrying about what would happen to Zsadist if she did.

After the birth, she experienced post-partum depression while doing the parenting because Zsadist refused to touch her. Once Nalla was old enough to know how absent her father was, Bella reaches out to Phury for help since she couldn't get through to him and when it looked like Zsadist wasn't going to make the effort, she was fully prepared to move to a house her brother owned.[2]

Rehvenge's history comes to light, as Bella finds out that Rehvenge is part sympath. She was also told about how her father's death wasn't just an accident, Rehvenge had killed Rempoon for abusing his mother.

Bella is "funny, warm and thoughtful, as beautiful on the inside as she was on the outside."[3] Even though she'd been experiencing a difficult pregnancy at the time and was on bedrest, she did her best to prevent her hellren from worrying and encouraged Cormia and Phury to be together.

Bella is beautiful, tall and slender with long, wavy brown hair that she always wears down and bright blue eyes. Her face is "classically boned."

While Cormia stayed at the mansion and Bella was on bed rest, they became friends; she kept Bella company and they bingewatched Project Runway.

When Nalla was old enough to realize her father wasn't there for her, Bella was ready to leave her hellren for the sake of her young, holding her well-being higher than her own happiness.

She'd known for a while that her brother-in-law thought he was in love with her, but she didn't say anything about it for a long time and when she did, she was compassionate with him.

After her father's death, her brother raised her just as much as their mahmen did. Since Rempoon had been abusive, which she was too young to remember, Rehvenge was a little over-protective so she moved out of the family home to become independent.

Their relationship has been especially rocky due to Z's PTSD, but she's supported him along the way, only thinking of leaving him when his issues began to affect Nalla and not because she didn't love him. When he promised to be a better father and proved it through his actions, she supported him as he learned to be a father and talked to Mary about his past. 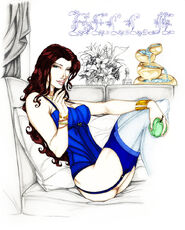